How it all started in Ambositra in 2002.

During her work as a tourleader Remi Doomernik, visited Ambositra regularly. First she supported some children living on the streets, until she met some local women who had created their own association Fazazoma. Remi started working with them, and founded the Dutch association Madalief in 2002, to support this local association. At that time they took care of 5 children, some of them orphans, some of them had been living on the streets. They stayed in one of the local lady’s home, where she also took care of her own 3 children.
Remi supported them, with her knowledge and financial support.

The first project of the Dutch association was to find financial support for the construction of a real home for Mme Honorine and her children. This house was build in 2003, and three other houses were build afterwards to give shelter to single mothers and their children.
After that, collaboration with the ‘quartier’ started, and we build two new classrooms and a kindergarden class for the local public school. Since 2005 we run the kindergarden class and prepare daily meals for the 60 pupils in our schoolcanteen.
We renovated houses of single mothers, take care of the sick, old and disabled in Apihamdiamby the quartier of our local association.
Since 2007 most of our children and mothers live in the centre Akanin’ny Fitiavana, which is led by the wonderful Mme Honorine and her team. 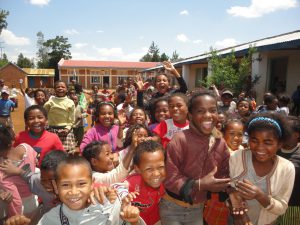 In 2010 we opened our Residence Madalief in Antsirabe. This is the biggest project of the Dutch association, which has as its aim to create work for our youngsters of the association of Ambositra and to generate income for the projects of the association. Since then we started several projects in the direct surroundings of the Residence as well.
Remi is still in charge of all these projects and travels between Madagascar and Europe. To ensure the continuation of the projects and the good use of the funds, and to inform donators about the activities in Madagascar.
Projects in the surroundings of the Residence
In the five years since its opening we already started different social projects in the surroundings. We adopted 6 public primary schools, and supported them with buying school materials, paying school fees for the poorest children, paying a small salary for the teachers that never received their salaries. We also helped renovating old buildings, and building new classrooms where necessary.

In 2015 we renovated a college with ten classrooms, and in 2016 we are going to build 7 new classrooms for three different schools. One of them is the Lycee where students finish their last three years of highschool. 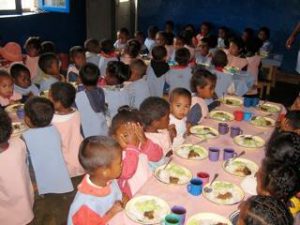 Breakfast canteen
Since 2011 we prepare a daily breakfast for the 50 smallest children of the nearest school. By doing so the children receive at least one healthy breakfast per day and they are able to concentrate better during the schoolday.
At the end of the year we prepare lunches for the highest classes to support them in their preparations for their exams. Their results are remarkable higher since then!

In 2016 we organised 4 schoolcantines on public schools where more then 6oo pupils get three times a week a healthy meal. At another school, just a bit further, the 100 pupils receive every morning a healthy snack.

Family support
We support several projects in the surroundings of the Residence, some for longterm others for a shorter period. Mostly single mother households, of families with disabled or sick children. We pay school- and medical fees, we give them their monthly rice supplies and try to start income generation projects for them (breading livestock like chicken or pigs, or starting a small shop)
In some cases we build them new homes, payed for operations, or rehabilitation after operations.

Ambositra 2015
In 2015 20 children are living in our centre Ankanin’ny Fitiavana under the direct care of Mme Honorine and her team. Five single mother families also live in this centre. Most of the children are attending secondary schools, some of them receive vocational training. 5 of them are allready at university!
They aso organise a daily canteen for the 50 to 60 pupils of the kindergarden class.
About 14 families in the surroundings of the centre receive support. Most of them are also single mother headed households, but some are grandmothers with their grandchildren, or (mentally) ill people. We pay for school- and medical fees and monthly rice supplies.

All these activities are financed with gifts from donators (most of them were visiting Madagascar  as tourists from the Netherlands (but also from Australia, Great Britain, Belgium) and the benefits of our hotel Residence Madalief. 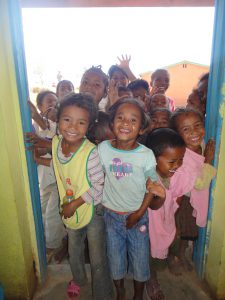 For more information please contact remi@madalief.nl or look at www.madalief.nl